Persian Mosaic, Getting Back to Iran after 25 Years, by David Devine 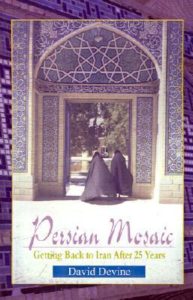 The More Things Change, the More They Stay the Same

Devine begins Persian Mosaic with a description of leaving Iran in 1973 after living there for two years. When he arrives in Tucson, he receives as letter from his Iranian friend Sarkis asking when he is going to come back. The author says it would be 25 years before he returned—and he couldn’t find Sarkis when he did.

The book begins with that return in 1998. Devine is shocked at the modernization in Tehran, and when he gets to Zahedan, where he had lived when a Peace Corps volunteer, he doesn’t recognize the city at first. Interestingly, he notes that “its development seemed to have followed the general recommendation” he had made when he worked in the city planning office in the early 1970s. He looks for the house he had lived in but learns it had been wiped out by a flood.

The second half of the book shifts back to his 1971-73 Peace Corps days. We see a young man trying to adjust to a culture far different from his own. Devine is a narrator you feel you can trust to be objective and honest in his descriptions of the Iranian culture and character. One theme of the book might be that the more Iran changes, the more Iranians stay the same. The regime had changed from Devine’s early days in Iran, but the male preoccupation with music and women hadn’t changed. And, most important, the Iranian welcoming and hospitality towards strangers hadn’t changed.