Behind Closed Doors by B. A. Paris 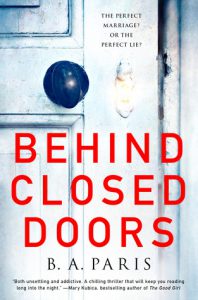 Grace puts on a fine show of a loving relationship with Jack, her rich attorney husband who prosecutes men who abuse their spouses. In actuality, he’s a brilliant psychopath who devotes all his energy making sure she speaks to no one outside of his presence. She’s not allowed a phone, and he locks her up inside a room in their home whenever she’s alone. He punishes her for the slightest infraction by starving her and making her bedroom/cell more and more uncomfortable. He takes her on vacation to Thailand and leaves her alone for days while spying on her all the time. He scotches her every attempt to ask for help. He creates a bizarre room/ cell in the basement which is apparently being readied for her developmentally challenged daughter, Millie, who is to come home soon from boarding school. Grace has no doubt Millie will find her life even worse than hers.

The story is certainly gripping in one sense, but I didn’t really find it credible enough to really worry about Grace that much. I think this is because she was so degraded and humiliated she really had nowhere to go but up. When she’s out with her husband socially, why doesn’t she cry out for help, scream out what’s happening, beg somebody to call the police? She really has nothing to lose. The fact that she says nothing and doesn’t try to escape when she has the chance makes you think it might be due to some strange psychological attachment she has to her psycho husband – but she doesn’t. She plainly hates him and wants desperately to get out.

There have been real life situations where women have been taken, chained in basements, tortured. But people don’t want to read about such horrific brutality. It seems like such things rarely happen anyway, and then only to others. But the strange attraction of Behind Closed Doors might be that the reader can imagine it happening to their best friend. If Grace could be so brutalized and controlled and forced to show a complete false face to the world, could your best friend be doing the same thing?