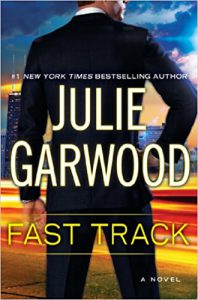 Cordelia wants to get rid of her crush on Aiden, a man she’s known since they were young children and who is the brother of one of her best friends. When her father suddenly dies, she discovers the real name of her mother who left her and her father alone when she was a baby. Her two best friends’ husbands, who are both FBI agents, find out that her mother is a prominent socialite in Australia. Cordelia sets out to confront her.

Aiden, who is handsome and ultra-wealthy, takes her to Sydney and practically holds her captive in one of his hotels there until she can confront her mother. They have ecstatic sex but say little to each other. Aiden remains domineering and arrogant. Back home, Cordelia is still determined to get rid of her crush on him, to the point of buying a house hundreds of miles away in Boston so she won’t have to see him again. But this is a romance novel. We all know how it ends.

Who am I to criticize a novelist who has forty million copies of her books in print? And in truth, there’s a lot to like in this story. Cordelia is perfect, a rich man’s daughter who got a PhD in chemistry and yet teaches for peanuts in a Catholic school. Her two best friends are pretty and rich but also nice, down to earth, and supportive. Their FBI husbands are not only convenient to the plot but are also the two nicest guys in the world. Aiden and his two brothers are the perfect trio of rich guys: the hard charging and arrogant one, the hard charging and not arrogant one, and the ne’er-do-well with a heart of gold.

The plot could not be easier to follow. Everyone’s thoughts are straightforward and clearly expressed to the others. If they sometimes argue about what to do next, it’s just because there is, rationally speaking, more than one way to go. The only exception is Aiden, who is so arrogant he doesn’t deign to explain anything. But in his case, the narrative sometimes suddenly changes to his point of view, the reader hears directly what is on his mind, and we cannot possibly miss what is going on.

The prose is precise and clear; complicated thoughts are set out step-by-step in separate sentences. It was a pleasure to read a book that defies current literary fiction guidelines and plainly tells you what is happening.

On the other hand, the story was so plainly set out, and the resolution so obvious, that I found myself wondering how many more pages of this I had to read. The title is definitely a misnomer. The characters are cardboard figures. The reader just has to accept that Cordelia has always had a crush on Aiden. There’s no backstory showing any relationship during her childhood; you just have to accept that it happened. There’s also no reason shown why she should like him in the present – except for the great sex. There’s no feeling of place at all, even in Sydney.

The writer sometimes seems to be telling the reader what reaction to have rather than showing the reader something new. For example, when Cordelia buys a house in Boston, it’s not really described, nor is the neighborhood described, or even named. It’s just a house “completely remodeled and located in a coveted neighborhood.” Okay, we get it. We’re supposed to be impressed and think Cordelia is even more rich and cool. But as a reader I’d like to see the house, see her thoughts about it, see how she thinks she will fit into the neighborhood. And I’m not saying I would like to have seen a more detailed description of Aiden’s body, but it was eventually tiring to be told over and over how great it was without ever getting a real picture of what the guy looked like.

I can see why forty million people like this stuff. I bought my copy only because it was the only novel in English in the airport bookstore in Lisbon. I’m not sorry I did. I could read it in dribs and drabs on the plane without ever worrying about losing track of what was going on – in either the plane or the novel.