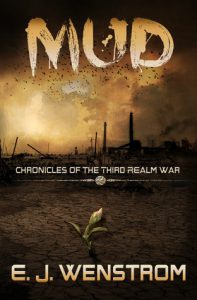 Longing for a Lost Faith

Mud is a dystopian fantasy apparently inspired by stories of descent into the underworld such as in the Orpheus myths and passages of the Iliad, Odyssey, and Aeneid, as well as stories of the fall from heaven as in the Old Testament, the Divine Comedy, and Paradise Lost. In Mud, we have a golem fighting his way into and out of the underworld, like Orpheus with a mission to bring a woman back to Earth (I mean Terath). If he is successful, he will be given a soul and become human (like Pinocchio?) and the ability to die (like the Wandering Jew?).

The settings shift constantly from one exotic, stylized backdrop to another, making it a kind of verbal representation of a graphic novel.

The story presents a vision of a future Earth devastated by war and reduced to a few towns like Hope (I mean Epoh), now controlled by authoritarian figures with clubs, in which some of the residents long for a lost faith in something spiritual. As in other stories with this theme, one or a few people rebel and strike out to regain their freedom. Stay tuned. More bloody battles will have to take place in the follow-up books before things can be set aright.