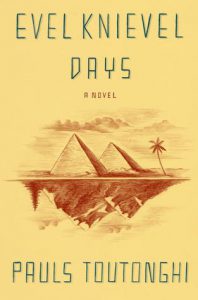 This is an enjoyable story about a young man born and raised in Butte, Montana, whose Egyptian-born father abandoned him and his mother when he was three. He leaves Butte in his twenties and goes to Cairo in search of his father. The novel is written in a simple, conversational style and has a basic plot, but Khosi Saqr’s quirks of character provide a fascination as he reacts to people and society in Butte and Cairo.
The story is told almost completely in simple, staccato sentences, the way we often talk to each other:

“One fact. One instructive, inelegant fact. My mother’s husband, my father, my unknown and distant father, my mockery of that word father … deserted us when I was three.”

As in conversation when we want to be dramatic, parallel structure is prominent:

“I had books on biology, chemistry, calculus, engineering. I had encyclopedias and Bibles. I had the Great Books, the classics of world religious thinking, of philosophy and poetry and fiction. I also had ….”

This style keeps up the impression that we are not so much reading a book as listening to somebody talk to us. Admittedly, after a while the style can be reminiscent of what George Orwell mocked in his 1940 essay “Boys’ Weeklies.” A sample that Orwell gives:

Groan!
“Shutup, Bunter!”
Groan!
Shutting up was not really in Billy Bunter’s line. He seldom shut up, though often requested to do so. On the present awful occasion the fat Owl of Greyfriars was less inclined than ever to shut up. And he did not shut up! He groaned, and groaned, and went on groaning.

The plotline is basically whether Khosi will find his father or not and how they will react to each other if he does. There are numerous chances for twists, turns, or surprises, but the reader who is hoping for these will be disappointed. The story is completely straightforward. What holds our interest is the vivid description and the appreciative depiction of the Egyptian people.