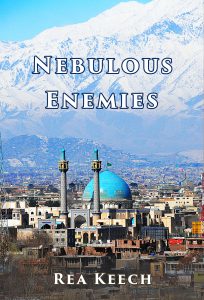 Nebulous Enemies is a suspenseful story set in Afghanistan as foreign aid workers fear the looming withdrawal of American forces that protect them from the Taliban.
In Baltimore, Roger’s wife suddenly disappears, and although their relationship was never normal, he leaves the States to pursue her in Afghanistan, suspecting she has run off with Lyle, a U.S. contractor working there. In Kabul he is shocked to find out the horrible crimes his wife and Lyle have committed.
Lyle threatens Roger’s life, and Roger finds that Lyle is also a danger to Sophie, a Belgian aid worker who teaches Afghan women. For them, Lyle is an even more immediate threat than the Taliban bombings plaguing the city, and Roger’s goal is now to save Sophie and himself.
Nebulous Enemies is a condemnation of the corruption of some mercenary overseas military contractors and a testament to the bravery of the idealistic aid workers who remained there to the last minute trying to help the Afghan people.

“An idealistic teacher gets sucked into an unfamiliar world of war profiteering in this bracing thriller.
… Despite being out of their depth, Roger and Sophie attempt to right a raft of wrongs in a country at war…. Keech portrays Roger and Sophie as forces of good—moral but naive—and their journey toward finding each other amid danger is memorable. However, the true scene-stealer here is the country of Afghanistan, brought to life in this well-researched volume. The chaos of war catalyzes key developments in the plot, and Afghanistan’s citizenry plays a strong supporting role.
…This engaging, layered work proves to be both a love story and a cautionary tale.” — Kirkus Reviews