Let Me Tell You Where I’ve Been, ed. Persis M. Karim 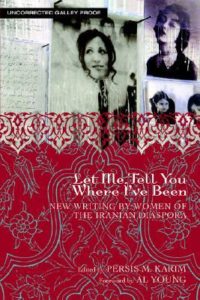 Women without a Home

This collection of 87 poems and stories by 50 different women presents a more unified picture of Iranian women living outside of Iran than one might think. I would suggest jumping right into the selections themselves and saving the scholarly Foreword and Introduction until afterwards.
The poems and stories are interspersed thematically. They show a wide range of experiences, from newly arriving in the U.S. or Europe, to returning to Iran after many years living abroad, to going to Iranian parents’ homeland for the first time. One particularly moving story is by a woman who came to the States as a young child, had a wonderful experience for years with her classmates and their parents, but then saw a 180-degree change in the American attitude towards her and her family after 9-11.
The poems are pleasantly accessible. In one, a girl watches as her homesick parents show slides of their happy youth in Iran. In another, a girl who grew up in America while Iran was at war with Iraq finds herself in Iran for the first time and begins, “I am Iranian/until I open my mouth. Then/I am American.”
It is fortunate that Persis Karim has preserved (and written some of) these works. In an online Doreh-e-Ketab book discussion, she pointed out that they were written 13 or more years ago. Only a few of the women have become recognized authors today. Many are no longer writing. This is a shame, but at least these works of theirs are still available to touch us.