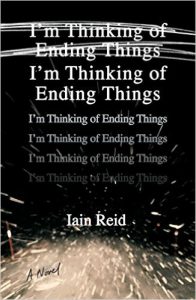 A young woman who is thinking about committing suicide takes a car trip with her new boyfriend to visit his parents in their farm out in the country. She tries not to encourage him too much about their future together. Although they engage in a lot of philosophical banter about the meaning of things, the primary feeling she seems to have is a mild degree of repulsion about everything, from the white residue left at the corner of his lips after he eats a bowl of cereal to a vision of his parents’ pigs slowly being eaten alive by maggots. She worries that even death might not end her suffering.

His parents are depressed and somewhat creepy. The young couple leaves after dinner and begins the drive home through a late-night snowstorm. In the middle of the storm, the boyfriend, Jake, turns off the country road onto an even smaller country road to find a trash can so they can dispose of their lemonade cups. They come to a giant high school building where they (possibly) encounter a deranged night janitor. Before that, however, while starting to make love in the car, Jake sighs out the name “Steph.” This isn’t her name, we are told, though we are never told what her name actually is.

There’s a lot of slow-speed fleeing and hiding in the high school building. The narrator becomes less and less sure of who she is. She believes Jake might share an identity with someone else – or maybe even with her. It’s hard to tell. It seemed like bad things were about to happen, or possibly already had happened.

This award-winning novel received rave reviews, praising it as a “psychological thriller” that is “absolutely chilling.” True, there was a lot of snow falling in the second half of the book, but that was the only thing that I found chilling. The two characters’ insights about life were sometimes interesting, but sometimes their conversation verged on incoherence.

The first half of the book reminded me of The Bell Jar with the narrator’s relentlessly depressive outlook gradually wearing down her ability to appreciate life, even life with her attractive, attentive and very intelligent boyfriend. And I can see how the farm life could seem creepy to anyone in that state of mind. There are hints of evil or sadness lurking throughout the house, but nothing much seems to come of that. The narrator herself sums up the visit after it is over: “It hasn’t been fun or interesting.”

And the trip toward home, and the slow chase through the high-school-building, and especially the possible switching of identities at the end, just left me confused. Nothing the characters did after they turned off the road made any sense to me. Because I couldn’t understand why they were doing what they were doing, I had a hard time caring about who they really were or what would happen to them. There probably was some deeper meaning, or a depiction of psychological forces at play that I just didn’t get. But for sure I didn’t. If you, like me, are the kind of reader who wants to know what happened at the end, this book is not for you.