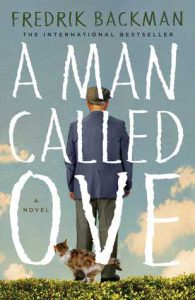 What I like best about this book is the way it made me laugh out loud so often, sometimes at statements made by Ove and sometimes at the author’s descriptions and comments that mimic how Ove would have expressed it. The book is a study of character filled with little episodes. The interest is not on what is going to happen—that is quite predictable—but in seeing Ove in yet another scene where the author can demonstrate his exaggerated cynicism, eccentricity, and overall grumpiness.

Of course, Ove is a kind of Every Grumpy Man to some extent. He’s set in his ways, he disdains people who are not like him, and he’s resentful of the way society has changed since the “old days.” His world is black and white. We’re told he is “the sort of man who checks the status of all things by giving them a good kick.”

Ove’s comments make me laugh the loudest when I have to admit that they echo my own disdain for some modern values. For example, Ove likes mathematics: “There were right or wrong answers there. Not like other hippie subjects they tried to trick you into doing at school, where you could ‘argue your case.’” (Emphasis mine.)

The unconvincing ending may bother some readers, but this is not a book in which everything actually could have happened. It’s a kind of slapstick morality play in which we expect Grumpyman to become more and more admirable beneath his rough façade as the action progresses.