The Real Justine, by Steven Amidon

Better Than the Old Wife 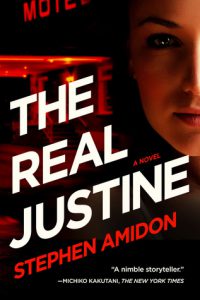 Michael, a 40-year-old, divorced New York suburbanite who has lost his prestigious job and his most recent girlfriend, is on the verge of falling into alcoholism and depression when he is rejuvenated by a 72-hour stand with the beautiful and mysterious 26-year-old Justine. But she disappears as soon as their marathon of great sex and mutual admiration is over.

He runs into her on the street nine months later while he is in the company of his 14-year-old son. She is having a confrontation with a strange, muscled, tattooed guy. Without any real justification, he punches the guy, which leads his son and ex-wife to question his sanity and the police to become interested in him when the guy is found murdered a few days later. Justine disappears again, and he avidly begins to investigate her mysterious past by any means necessary, running roughshod over his relations with his ex-wife, ex-girlfriend, Justine’s mother and stepfather and most of the power structure of this suburban town. He discovers the wild, dangerous and promiscuous life Justine has lived for the past ten years since she either was or was not sexually abused as a teenager. His investigation takes two steps forward, one step back, over and over. Justine reappears and disappears again. His passion for her is not cooled by his skepticism about her story, and his investigation becomes even more daring and outlandish.

This is a good mystery story once you accept the premise that the narrator has undergone a personality change based on his 72-hour affair. The constant revelations and counter-revelations about Justine’s past life do grow a little tiresome after a while.There are some interesting though somewhat stereotyped characters. Michael’s observations about the ways and attitudes of ex-spouses were at times really amusing. The resolution of the mystery at the very end was a little thin. By that time, I had been jerked back and forth so many times I really didn’t care. But it was a good, fast read.