To Keep the Sun Alive, by Rabeah Ghaffari 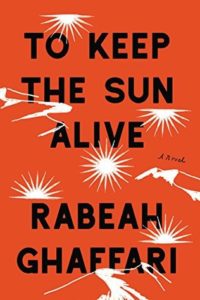 Life in the Orchard

Ghaffari cleverly interweaves stories of an extended Iranian family in Naishapur in 1979 as Iran edges towards the Islamic revolution. Gradually, the characters realize a change is coming, but life goes on: their traditions, customs, meals, and amusing personal quirks persist. The story ends as the revolution is about to begin.
It’s a well crafted novel. The orchard in Naishapur serves as the symbolic center of the story. All the characters have some relation to it. And they each have their own way of escaping the limitations of their current lives. The old judge consoles himself with silent, solitary contemplation. The mullah relies on dignity and “certainty.” Mohammad lives an imaginary life with a woman not his wife. Jamshid resorts to opium, first, then to religion. Nasreen dreams of going to Tehran and living a modern life. Shazdehpoor imagines himself living as an English gentleman. Majid has revolutionary dreams.
Tying the story together is an interesting time frame. It begins with a 2012 description of Shazdehpoor as a street merchant in Paris. This is what has become of one of the family since the revolution, we eventually realize. Glimpses of Shazdehpoor in Paris punctuate the main part of the story in Naishapur, setting up a contrast between the rather idyllic life before the revolution and the reality of the outcome.