Losing an Enemy: Obama, Iran, and the Triumph of Diplomacy, by Trita Parsi 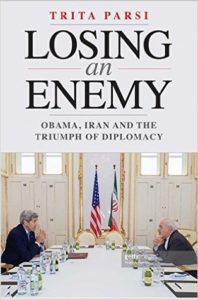 Trita Parsi, fluent in English and Farsi and acquainted with all the major players in the diplomacy that took three years to produce the Iran nuclear deal, is uniquely qualified to write this account. He has an intimate knowledge of both US and Iranian politics. It is his step-by-step focus on the evolution of the “deal” that helps make the book so informative, and it is the inclusion of human details that makes it so interesting.

Parsi takes us into the minds of the negotiators for Obama as well as Rouhani. Both sides of the story are presented with equal understanding. The book explains disputes over low-enriched and high-enriched uranium, kilograms of stockpiles, nuclear bomb “breakout” capability, “snapback sanctions,” and, most importantly, explains why the US and Europe allowed Iran to enrich uranium at all.

Since Parsi knows and had contact with US, Iranian, Russian, and other diplomats and negotiators, he can humanize the discussions. For example, he says Saeed Jalili, an early negotiator who later ran unsuccessfully against Rouhani, was known for “his tendency to hold long monologues addressing the many injustices Iran had suffered at the hand of Western powers.” Of the US negotiator Talwar Puneet, the only White House staffer who had actually visited Iran, he says, “the respect Iranians showed Puneet was noticeable.” The Russian foreign minister, Sergey Lavrov, we’re told, after a last minute objection by the French foreign minister threatened to scuttle the talks, got so angry he “was spotted entering the hotel bar ordering a full bottle of vodka.”

For the most part, the characterizations of the better known negotiators reflect popular perceptions. Javad Zarif, currently Iran’s foreign minister, “had a likability that’s off the charts,” yet we’re told he’s also known for his temper. And John Kerry, with a “reputation for being unflappable,” is also described as once losing his temper and slamming “his fist so hard on the table that his pen flew across it and hit one of the Iranian negotiators.” Not that the negotiations often reached points like this. Parsi says that “even at the height of their tense exchanges, the negotiators could at the same time only be moments away from laughter. In fact, laughter was often what saved them from diplomatic dead ends.”

I had presumed the nuclear negotiations were based on the countries’ desire for strength and safety, and to a large extent this was true. But Parsi’s narrative views countries, especially Iran, as people who are susceptible to slights and having their feelings hurt and taking offense. Countries, his thesis goes, see each other as “rivals” for prestige and the world’s attention. They want to “take center stage” and assert their “right to play the role of a regional power.” According to Parsi, it was the Obama administration’s understanding that Iran wanted to be respected, recognized as an important country, and included among legitimate nations that enabled reaching this agreement that stands as one of the greatest diplomatic achievements of modern times.