The Program, by Suzanne Young 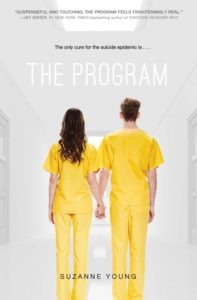 Teenage Dystopian Fiction with a Twist

Because of a rash of teen suicides, a new system of handling teenagers’ problems has been developed. Kids are tested for emotional wellness every day to detect signs of suicidal thoughts. If any signs of suicidal thoughts, or depression of any kind, are detected, teenagers are carted off to a treatment center where their minds and memories are cleansed, and they come back vaguely happy but without memories.

The entire teenage population lives in fear of being taken away. They respond by developing QuickDeath, an instant suicide pill that many of them feel is preferable to being taken away and having their minds altered. But the news of each suicide only intensifies the adult world’s determination to root out and fix every instance of depression.

One by one, teenager Sloan’s friends and relatives are carted off, only to return much later as vaguely happy zombies. Trusting her parents with her worries or concerns is absolutely out of the question, as any sign of worry or concern is treated as a sign of a dangerous depression. So Sloane instead bonds even more deeply with her brother and a close friend. But their world quickly shrinks down to a desperate attempt to retain their identity and their love.

I thought this was a compelling story, the best teenage dystopian fiction I’ve read. The horrific scheme to destroy the very life of a whole generation is caused, not by some ruthless foreign government as in The Hunger Games, but by overwrought parents’ demented determination to save their children from themselves. The zombie children are kind of what the parents want. They’re safe. They won’t hurt themselves. They can hold jobs. The spirted teenagers’ need to fight this system to the death – literally – is believable because it’s really not that much of an exaggeration.

The teenage characters were well developed and seemed real to me.   The story gradually becomes more and more horrific, but fascinating, as we are shown the inner workings of the mind-altering protocol. This book is the first of a five-part series, but it seems to me that whatever the author has to say about this subject was said (and said well) in the first 95% of this book, and I didn’t feel any need to read another volume. But I would highly recommend the first.