My Absolute Darling, by Gabriel Tallent 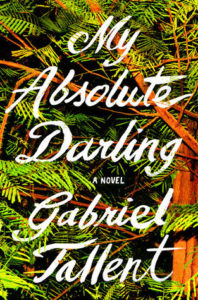 Incest is Not Best

Five stars for the intensity of this incestuous love story between a brutal, twisted, gun-obsessed survivalist father and his fourteen-year-old daughter. The daughter, Turtle, shares her father’s belief system but has begun to notice that the no one else does. She is keenly aware of and resistant to her teachers’ and neighbors’ attempts to bring her out of her shell, and as the plot moves forward the reader becomes aware of the real danger she would face if she turned on her father.

The subject matter is of course difficult, and the book as a book was a little hard to read too. To me, every aspect of it, from Turtle’s repetitive ruminations about her dilemma to the page after page of metaphorical description of the natural world to the long bloody climax was stretched out for far too long. Still, I thought it was a great read for anyone who has the stomach and the patience for it. And I thought Turtle was a great character, a truly sympathetic heroine slowly dragging herself out the muck her father had raised her in.