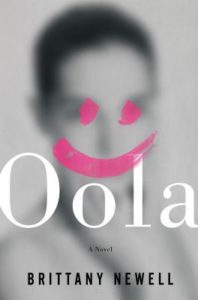 This book reminds me a lot of The Goldfinch by Donna Tartt, except it’s better. There’s the same young male character who thinks and acts like a girl. The same absence of any apparent emotional connection with parents or family. The same total lack of any type of conventional morals, together with the almost magical ability to float around the world making half-hearted sexual and drug connections and committing minor crimes without consequence. The same obsession with the offbeat way someone acted or looked or talked, but without any interest in the actual act or the content of the speech. The same lack of a plot.

The first sixty pages succeeded in doing what Tartt failed to do – make this interesting. Oola is just better written, in my opinion.  But Oola the character is so cool and unaffected you eventually lose interest in what is happening to her. A promising pianist from a wealthy family, she travels the world with her boyfriend, Lief, in a house-sitting binge for their parents’ wealthy friends. They settle in a house in Big Sur, where they pretty much give up sex and Lief secretly gives up his writing ambitions and instead spends his days cataloging the minutiae of her life. She does say a lot of weird things, but you get tired of it. She casually mentions one day that she prostituted herself at age twelve, apparently just for fun. He doesn’t follow up. He is fascinated by her body and her clothes, but none of it inspires any lust. They mostly hang around, sometimes going to parties, where her weird behavior apparently inspires nothing more than mild bemusement on the part of the other guests.

It’s at this point that the excellent writing just can’t carry the novel all by itself. As if to make up for the lack of a plot, the writing becomes more bizarre:

“The sun set slowly in her scalp: her head looked like a pineapple upside-down cake.”

“I watched her belly button irrigate. ‘You look beautiful,’ I squelched.”

“Suffice it to say it was a sore spot between us, ever since I asked if I could put her tampon in my tea.”

Near the end, Lief imagines in advance, in its entirety, his long trip to the dentist’s office. Then he tells us about his actual trip. Nothing much happens in either one.

The characters never let anything in their lives really upset them, and after a while some readers might adopt the same attitude. Although the writing makes the book a really promising first novel, the characters’ blasé attitude and their focus on the trivia of life might wear some readers down.