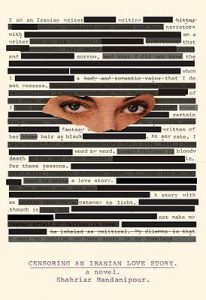 What It Takes to Survive

In this unconventional novel, the passages in bold print are the love story that the author is attempting to write. His sense of humor is evident from the start as the girl and boy in love are named Sara and Dara after the characters in the first-grade Iranian primer. This bold-text story is presumably what the author intends to submit to the censor at the Ministry of Culture and Islamic Guidance. Some parts are crossed out, although still readable. These are the parts that the author assumes would never be approved by the censor. Part of the fun of the book is reading these deleted passages. For example, Sara is hiding under the sheets in her room having a computer chat with Dara. The words “under the sheets” are crossed out.

The majority of the book is in standard print. These passages have various functions. Quite often it is the author looking up from his Sara and Dara story and talking directly to the reader. He might make a witty comment on what he has just written: “Contrary to this idiotic sentence that can only come from the pen of a writer who has been chewed to the bone by censorship ….” Once he asks the reader to delete the whole chapter he has just written. Often he proposes alternative versions of the story that are more detailed and realistic than anything a censor would approve. And sometimes he adds background information that would never get past the censor.

In the most fascinating of these comments to the reader, the author refers to Sara and Dara as real people who have minds of their own and are not completely under his control: “I sometimes think Sara sneaks peeks at the sentences I write about Dara and his thoughts.” Another time he says, “Sara raises her hand to slap his face. I grab her wrist.” Of Dara he says, “I have tried to dissuade Dara from what he is planning, but I have been no match for him.” And Dara complains to the author of his story, “You shouldn’t have written me like this. You shouldn’t have written me as browbeaten and pathetic.”

Sometimes the author asks the reader for advice: “What do you think we can do to help Dr. Farhad?” And at times he asks the reader for help: “Just push your hand down on the horn of Dr. Farhad’s car.” These devices are supported by passing reference to literary theories, including those of Roland Barthes, who believed that in the best fiction the author’s intention is irrelevant to the story. The appearance of ghosts or shadowy characters in the story is supported by reference to authors such as Hawthorne, Gogol, Kafka, and others.

Of course, references to Iranian literature pervade the novel, too. Nezami’s Khosrow and Shirin stands as a comment, explanation, and contrast to the story of Sara and Dara. The author often inserts background information on Iranian literature, history, or culture—always in an amusing way.

The witty tone of the novel persists even in its condemnation of censorship, which is presented with a balanced understanding that might be surprising. He shows that Iranian writers have always been subject to censorship, whether that endured by the ghost-poet who appears from time to time in the novel (presumably Hafez) or by modern writers like Sadeq Hedayat. He presents the censor of his novel as perhaps misguided and foolish yet sincere and interested in literature as well as protecting the morals of the public. Mr. Petrovich—he’s named after the detective in Crime and Punishment—actually becomes a somewhat sympathetic character in the story.

Mandanipour’s novel shows how life for all Iranians changed with the revolution. But just as his presentation of censorship avoids bitterness, he describes life in the Islamic Republic as oppressive yet perhaps not worse than oppressions suffered throughout Iran’s history under invasions by Mongols, Arabs, and others. The novel’s wry humor shows what it takes to survive.