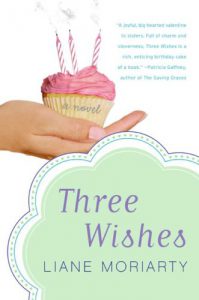 There are already 2,511 reviews of this novel on Amazon and 3,945 on Goodreads, and so I will just explain why I found it such a pleasure to read. It wasn’t for the plot or action (mostly chick concerns) but for the witty, humorous voice of the author in describing her characters. In general, she tends to find people and the situations they get themselves into far more droll than tragic.

The novel is filled with comments that made me laugh out loud. Instead of a review, I will just list a few of them to show what I mean:

These are just a few quotes from the earlier parts of Three Wishes. If they don’t make you want to read the novel, I guess the novel isn’t for you.