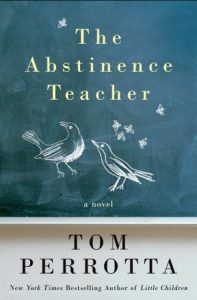 Perrotta’s novel has a witty, ironic, detached tone. The author seems to be above it all, looking with amusement at the world around him. Here are some phrases and sentences that typify this attitude.

Sometimes it’s a character who speaks with this tone:

More often it’s the point-of-view character who is laughing at what is being described:

(We presume it’s the character Ruth being snarky or ironic about her friend Donna’s tendency to fret about things.)

(Ruth again showing her attitude, here towards the school superintendent.)

(Ruth’s impression of the superintendent.)

(Ruth’s attitude towards members of the Tabernacle.)

(Ruth’s observation of how her daughter dresses for church.)

The snarky observations are usually in Ruth’s mind, but sometimes they are in Tim’s:

Sometimes it’s hard to tell if it’s the point-of-view character or the author himself who is laughing at what is being described.

(The phrase is obviously mocking the language that internet dating sites and their clientele and glamor magazines might use. The technique is the deadpan insertion of their language without quotes.)

But is it Ruth who is using the deadpan humor here, or is it the author? Here’s another example:

Advice comes from the outside, not inside. The comment seems more the author’s than Ruth’s. Yet we’re in Ruth’s head. Are we to understand that she ignores her immediate pain and makes a witty understatement about it, as if it happened to somebody else?

To tell the truth, it’s as though Perrotta sneaks his own authorial observations into the heads of his point-of-view characters, convincingly in most cases. His main characters are given his own ability to take a distanced, ironic look at themselves. This creates the overall tone of an author who mainly finds life and the people in it amusing. It’s an authorial voice that I enjoy.