The Pavilion of Former Wives, by Johnathan Baumbach 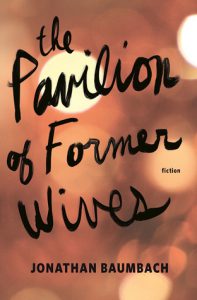 Fourteen stories about people, mostly academics, seemingly searching for love. In the title story, a man gets the chance to relive two scenes with his third wife in backwards order: first as their marriage is wearing out and she tells him she is tired of him; second as he cheats on wife number two with her thirteen years earlier, looking at his watch the whole time.

In The Reading, a story that unravels in an illogical dreamlike sequence of events, an academic arrives at a college and accidentally runs into a woman with whom he had a one night stand years ago – but then doubts it is the same woman just as things get heated up. She pursues him, dumps him for a new acquaintance, makes love with him in a station wagon overnight, then takes the wrong train going the wrong way home with him. He also gives the wrong lecture in the wrong place, impersonates another author, and goes to bed in the wrong room where a strange man gets into bed with him. Quite a night.

In Seattle, a couple who both are on the edge of senility argue about whether the wife had an unlikely one-night affair fifteen years before while they visited that city. In Acting Out, a couple on the edge of divorce try out joint counseling, revealing a lot about themselves without changing anything.

Multiple failed marriages and an underlying theme of self-doubt and ambivalence pervade every story. Most of the men are afraid they are not manly enough, and most of the women seem to agree. None of the people are described, nor do they exhibit any emotion. They interact with others only through dialogue.

Some people might like this excursion into the minds of intelligent but somewhat neurotic failures, and maybe there is a subtext about the academic mindset that I didn’t get, but on the whole I thought it was passable but bland.