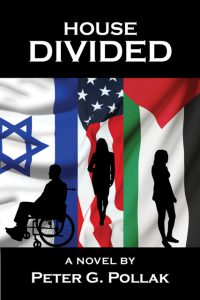 A Story Told at Arm’s Length

The story of House Divided is carefully constructed. Recent terror attacks in the U.S. have led the President to call Leonard Robbins, a retired CIA operative, back into action. After an introduction to Robbins’s wife and to the complication that his daughter is a member of the Students for Palestinian Justice organization at her university, the novel details how Robbins sets up his new office and chooses liaison personnel, then monitors the efforts to find the terrorists, and then, in the resolution, faces the dangerous involvement of his daughter in terrorist activity.

This is a thriller, not a mystery with a twist. The earliest, most obvious suspects—all with Arabic or Iranian names—turn out actually to be the terrorists. The native-born American characters turn out to be guiltless or, at worst, misguided. The efforts to catch the terrorists are traditional police or FBI investigations. Other people do the work and report back to Robbins. As another reviewer, has said, the story is mostly told at arm’s length, through reports given to Robbins. Even the chase-the-van scene is presented through listening to calls on police car radios and through dialog describing what is on a monitor showing a camera view of the end of the action. In a way, this arms-length involvement of the main character could be said to give the novel a feeling of credibility.

The point of view is mostly that of the ex-CIA man Robbins, with sections also from his wife’s and his daughter’s point of view. Then, after establishing these as the main characters, in the later chapters the point of view shifts briefly to one of the daughter’s friends, then to another friend, and even to a character involved in the terror plot. I actually found these unconventional shifts refreshing. Robbins is a bit stuffy and full of himself.

The novel comes to an exciting if generally predictable end that confirms Robbins’s ideas about terrorism and the Palestinian-Israeli conflict. He says that members of the Boycott, Divestment, Sanctions movement for Palestinian rights (BDS) “ . . . want to blame a minority of extremists without admitting that terrorism is endemic to Islamic theology.”