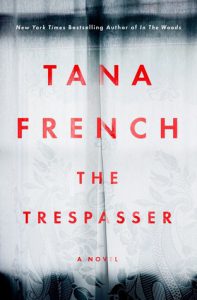 Detective Antoinette Conway of the Dublin murder squad refuses to close out a case against a pathetic local dweeb who apparently killed his new girlfriend, the love of his life. It happened on the night of his first visit ever to her apartment, where she had clearly been planning a romantic dinner, and probably much more.

Antoinette doesn’t trust the other murder detectives, who have been not only harassing her in gross, boyish and bullying ways but also seriously undermining her career. She discovers a bit of evidence that could possibly mean that someone else on the squad might be involved in the murder, or else covering it up. This makes her push back harder against the insistent pressure to interrogate the dweeb, force him to confess, and solve the case.

Because she doesn’t trust a word anyone in the squad says, she has to conduct the most important parts of her investigation outside of the squad room and away from their prying eyes. The situation is ripe for paranoia, and she almost succumbs to it when her secret theory of the crime, on which she has staked her career and for which she has risked the enmity of her co-workers, appears ready to fall apart.

Still, diligent detective work keeps turning up tiny clues that don’t match the dweeb theory even as she comes close to squeezing a confession out of him. She can get rid of her paranoia and save her career only by ignoring these clues, bowing to the pressure to solve the case quickly, and forcing the dweeb to confess. She has to admit to herself that most of the evidence points toward him.

The story is full of the details of police work: witness statements, forensics, CCTV monitors, timelines, dumpster diving, lying witnesses, witnesses who tell only half the truth, colleagues who seem to be suspiciously monitoring the investigation, cops who are hiding things from each other, long-ago memories suddenly resurfacing – and especially interrogations.

Not a word is spoken in this long novel without a hesitation, a biting of the lip, a quick glance between partners, a sudden intake of breath, or some other indicator of the emotional state of the speaker or listeners – and every single one of these reactions is analyzed by Antoinette as evidence of guilt, innocence, duplicity, doubt, fear, withholding, repression, gloating, bravery, cowardice, or something else. The intensity of it gets a little oppressive. Author French’s skill at dissecting these communications is remarkable, but after a few hundred pages of it you get the feeling you are watching a writer show off rather than following a critical element of the plot. You almost wish the detective would just go into a bar at some point and say “I’d like a hamburger” and the waiter would just say “okay,” and that would be that. This style makes some of the very long interrogations seem endless.

The plot comes to a satisfying conclusion, but only after yet two more long interrogations of a suspect, only one of which seems necessary.

I really liked the writing. One of my favorite passages occurs when Antoinette, tired after completing a long witness interview, sits in her car watching the passers-by with an exhausted detective’s eye:

I … watch the people going past. They make me edgy. Dozens and dozens of people, they just keep coming, and every single one of their heads is crammed with stories they believe and stories they want to believe and stories someone else has made them believe, and every story is battering against the thin walls of the person’s skull, drilling and gnawing for its chance to escape and attack someone else, bore its way in and feed off that mind too. Even the cute little student mincing along in her flowery dress, the shuffling old fella with his shuffling spaniel, they look Ebola-lethal. I don’t know what the fuck is wrong with me. Maybe I’m getting the flu.

If you’re going to read this, you might want to make use of this helpful Glossary of Dublin Cop Terms you will find used throughout the book. These definitions are derived solely from contextual clues and are not guaranteed to be accurate. But you need to know some of them right from the start.