The Pleasures of Men, by Kate Williams 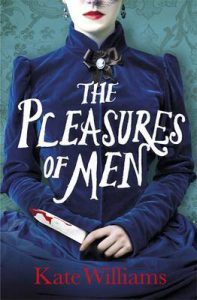 In London in early Victorian times, during a horrific recession that brings the seething underclass out into the streets, an orphaned 19-year-old girl of the gentility takes an abnormal interest in a series of sexual killings going on in the poor neighborhoods surrounding her guardian uncle’s house.  She follows the killings, sometimes in her imagination and sometimes in the streets.   Her uncle, who is trying to marry her off, harbors a strange, secret obsession.  She feels a deep guilt for something she did to seriously harm her brother long ago. Amazingly, the girl seems to be acquainted with most of the suspects.  The plot is resolved by an unlikely coincidence.  Despite the title, the pleasures described are mostly the pleasures of women, mostly taken with their maids, some of whom participate willingly.