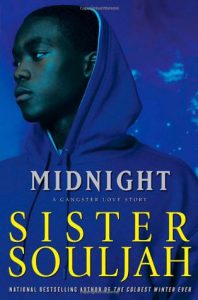 Superpowers in the Projects

Midnight’s father was a wealthy and powerful Sudanese landowner who had many servants, a compound so big he needed an extra building just for his guns, diamonds, oil and gold reserves, a master’s degree and a PhD. He was a music lover and trumpet player, spoke seven languages, and possessed all the power and wisdom and diplomatic prestige one could imagine. For reasons unknown, he sent Midnight at the age of seven, together with his mother Uma and his little sister, to live in the projects in Brooklyn.
Uma obeys because it is a woman’s place to obey, and not to question. So when Midnight amazingly beats up all the local hooligans who attack him one after another, his mother tends to his wounds but knows it is not her place to ask even a seven-year-old man any questions about how this happened. He escorts his mother to work and back every day on the subway, then returns home where he home schools himself. He also becomes a martial arts student at a classy dojo (not the cheesy kind with the windows fronting the street, we are told) and becomes the star pupil, the only one chosen for weapons training. He plays basketball with some friends and, while trying out for a more formal league, shows he is the best player by sinking 19 three-point shots in a row. He gets a job at a Chinese fish market. Guess what? His boss loves him. He spends a lot of time reading in a bookstore and beating the owner at chess. The bookstore owner greatly admires him.
He intrudes on an art class and is immediately mistaken by the teacher for a model because of his fantastic face and body. He wears a lot of name-brand clothing.
At home at night, Uma starts making perfume that is so magical and popular that Midnight spends hours going all over the city gathering ingredients and taking orders. Then she starts making dresses and the money starts coming in so fast they can hardly keep track of it.
Eventually he reaches the age of fourteen and realizes it is time for him to get married. Unfortunately, every single one of the girls his age in Brooklyn is a whore. Not to worry. He finds the perfect mate. Actually, she finds him, stalking him for weeks while he works at the fish market, mesmerized by his beauty. She is a sixteen-year-old Japanese girl who happens to be a world renowned artist and the daughter of the wealthiest industrialist in Japan. She wears name-brand clothes in incredibly original and artsy ways. Best of all, she speaks not a word of English.
Long after they are formally and legally married, they consummate their love in the shower stall in the locker room under the fish market. They both have amazing genitals. They still can’t speak to each other. She appears to be totally submissive to him. It is the perfect marriage.
He buys a house for them and his mother and sister. They never hear again from his father. Nor is there any word of what happened to his father’s other two wives.
Oh yeah, and he murders a guy for no ascertainable reason.
This appears to be a fantasy book for seven-year-old boys who like to dream about having superpowers but in real life are insecure and terrified of women. The one note – Midnight’s superpowers – is played over and over until it gets really boring. The need (and desire) of all females to be subordinated to him is mentioned or referred to on almost every page. The smug, superior tone of the narration really wears on you. The story line is totally unbelievable.