Bird in a Cage, by Frederic Dard 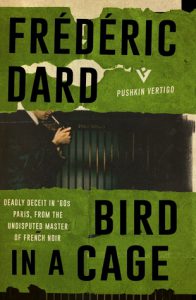 Not Quite a Christmas Miracle

After being away for several years, a young man returns on Christmas Eve to his deceased mother’s dusty flat in a dilapidated neighborhood in Paris.

Fighting off a pervasive sense of vague remorse and guilt, he tries to divert himself by joining the neighborhood residents celebrating the holiday at a local restaurant. There, he meets an attractive, lonely woman with an eight-year-old daughter. She takes him back to her place.

It’s not what you think. It’s much more shocking, much more ingeniously evil. The reader is never quite sure of anyone’s motives. The complex plot is hinted at by a raft of mundane clues. The narrator sees them all along, but they don’t resonate with him in his depressed and lonely state. I didn’t pick up on them either. It’s a lot of fun without a lot of blood and gore. I really liked this short and engaging mystery.