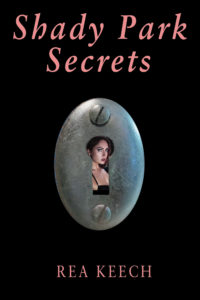 The witty, compassionate, and suspenseful story of a woman seeking love and fighting small-town hypocrisy and corruption, by the prize-winning author of A Hundred Veils.

A high school teacher falls in love, then puts that love at risk when she begins a secret fight to expose a pedophile preying on her students.
Nicole is already in danger of being fired for objecting to the new alt-right textbooks required in her school. Now she steps up to defend a student who’s been receiving unwanted nude pictures on his phone from a girl he hardly knows. And then Nicole starts receiving nude pictures herself.
Shady Park Secrets exposes problems in contemporary society, including political corruption and xenophobia, but the story is told with compassion and a wry sense of humor. It is a fast-paced, cleverly plotted, and satisfying conclusion to the Shady Park Chronicles series that began with First World Problems and Shady Park Panic.

“This third installment of a series maintains the author’s satirical take on modern American suburban life while dealing with some serious societal problems. …From ostentatious McMansions to crooked politicians and religious zealots, little escapes the author’s sharp eye for hypocrisy and amusing excess. … readers should find the story’s conclusion satisfying.” —Kirkus Reviews