A New God in Town 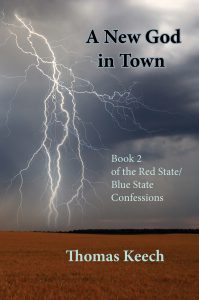 The Red State/Blue State Confessions is a dystopian series set in the very near future in Kansas and Massachusetts. The United States has essentially split into two different countries. Stacey Davenport fights back against a regime that is quickly reducing women to concubinage in Kansas. Even as a motorcycle gang, deputized as religious police, rounds up the designated women, Stacey starts a political campaign to overthrow the regime. But Stacey's initial victory does not really change the status quo on the ground in certain parts of Kansas. Now, while Stacey fights in Topeka for the legal right to keep her unborn baby girl, her sister must risk her life in a daring rescue attempt.

A New God in Town is Book 2 of the Red State/Blue State Confessions. Stacey in the Hands of an Angry God is Book 1.